Strava, the social network for cyclists and runners, has released a Women’s UK Cycling Research Report, based on survey analysis of over 5,000 active female cyclists in the UK.  The survey illustrates the motivations, influences, buying attitudes and barriers to entry.

Globally, Strava members currently upload 6 million activities per week, on average 5.3 activities every second. The average speed per ride is 19.8 km/h (12.3 mph) with an average distance of 34 km (21.1 miles) per ride, meaning the average ride time is about one hour 45 minutes.

Based on when they took up cycling, respondents were segmented into four groups: ‘new starters’ (less than one year), ‘recent’ (1-5 years), ‘established’ (6-10 years) and ‘long term’ (10+ years). Around two-thirds of UK respondents got into cycling in the past five years. 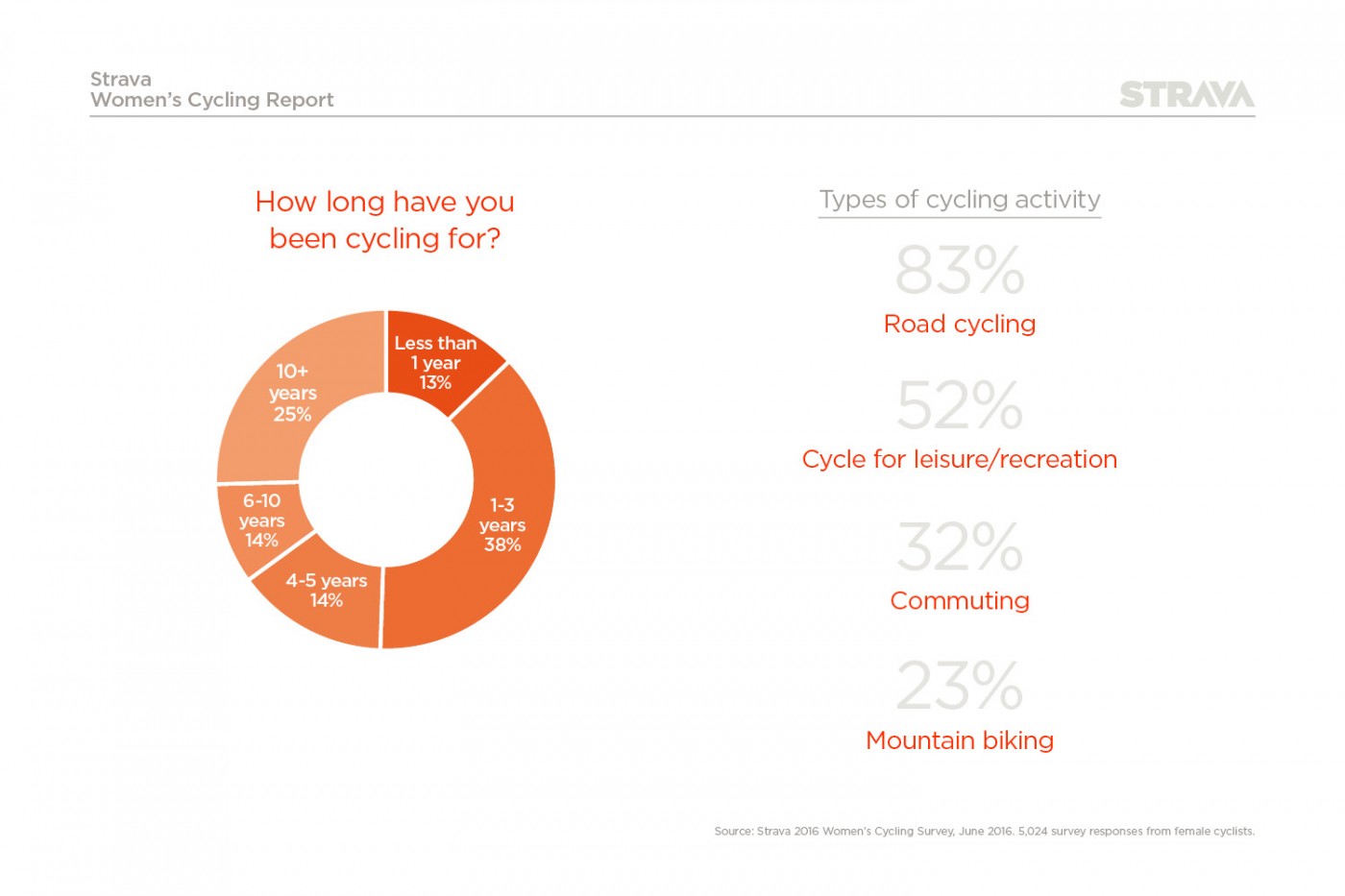 The women’s UK cycling research report shows that 61% of female cyclists are inspired by pro cycling and 64% take an active interest. However these results aren’t attributed to whether it is men or women’s pro cycling, and/or the discipline (e.g. road, track etc), that drives the reported attitudes.

What is reported is that 94.1% of respondents follow the Tour de France, 52.4% follow the Giro d’Italia and 39.6% follow the Vuelta a España. The Tour of Britain and Women’s Tour show their appeal with 52.0% and 39.6% saying they follow the races respectively. This all suggests it is largely men’s professional road cycling that is the driver of women’s cycling attitudes, all be it 73.2% are inspired by Olympic cycling events (a combination of road, track, mountain and BMX events).

This is unsurprising given the difference in the level of coverage between professional men and women’s cycling, and the prominence of the athletes. What this says to brands involved in mens cycling is that there is an opportunity, beyond the MAMILS, to engage female cyclists and fans. What we don’t know from this research is how big that opportunity is.

Motivation
Respondents have a diverse range of cycling experience. 51% have been cycling for less than 4 years. 62% took up cycling for general fitness and 56% were influenced by friends & family. When asked “What motivates you to cycle now?”, 84% said general fitness, 59% said friends & family, and 32% said events. 29% said weight loss and 26% said commuting motivates them to cycle. 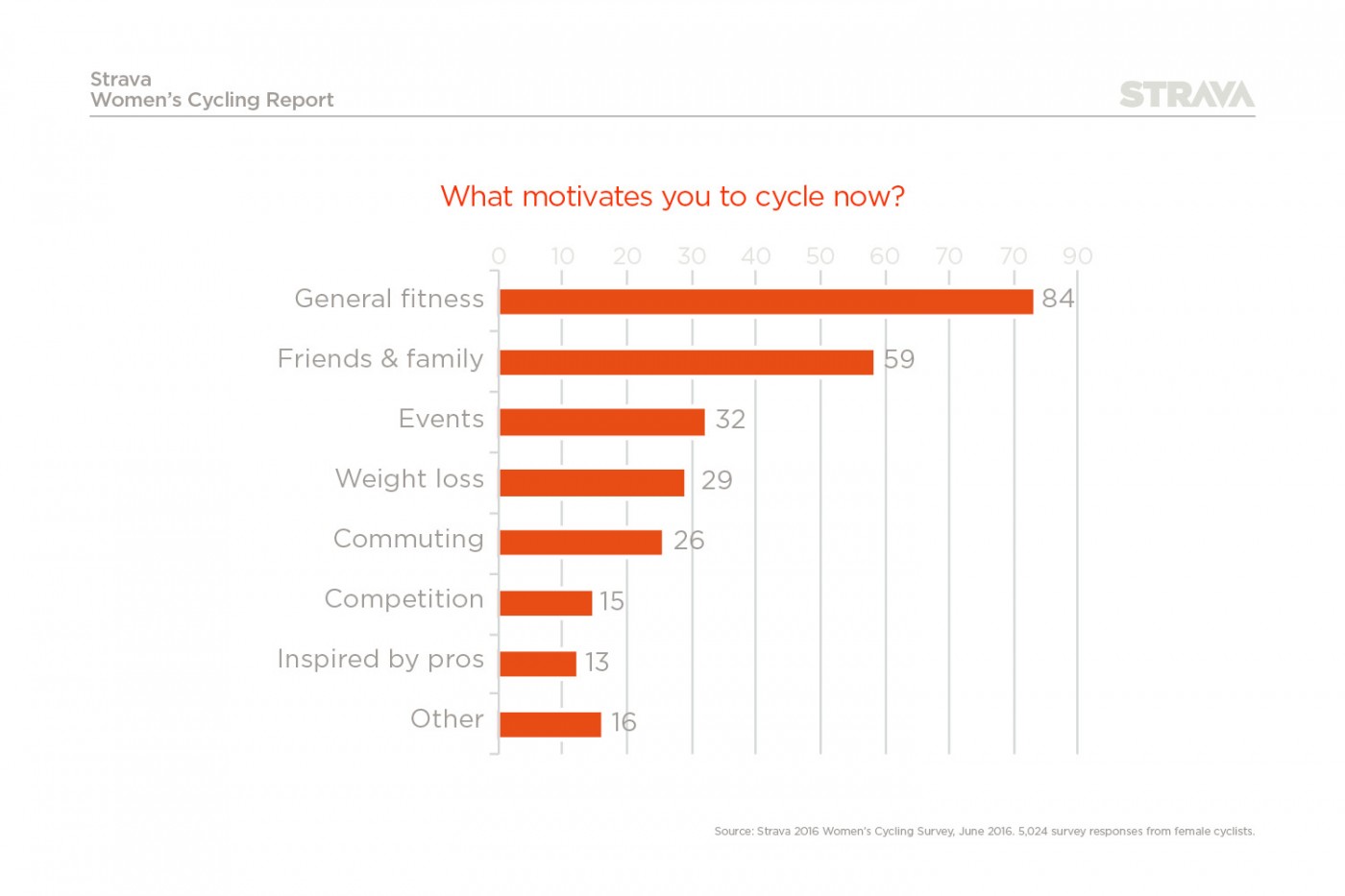 What motivates UK women to cycle

These motivations should be looked on by brands as opportunities to engage with the female cycling community in a meaningful way.  By understanding this, brands can build relevance with female cyclists by adding value to their cycling experience and/or solving barriers to engagement.

Overall, the women’s UK cycling research report shows two thirds ride up to 5 hours per week on average (meaning they ride on average twice a week). Just 22% say they ride with a cycling club, while 79% ride on their own and 63% ride with others – friends, family or their partner. 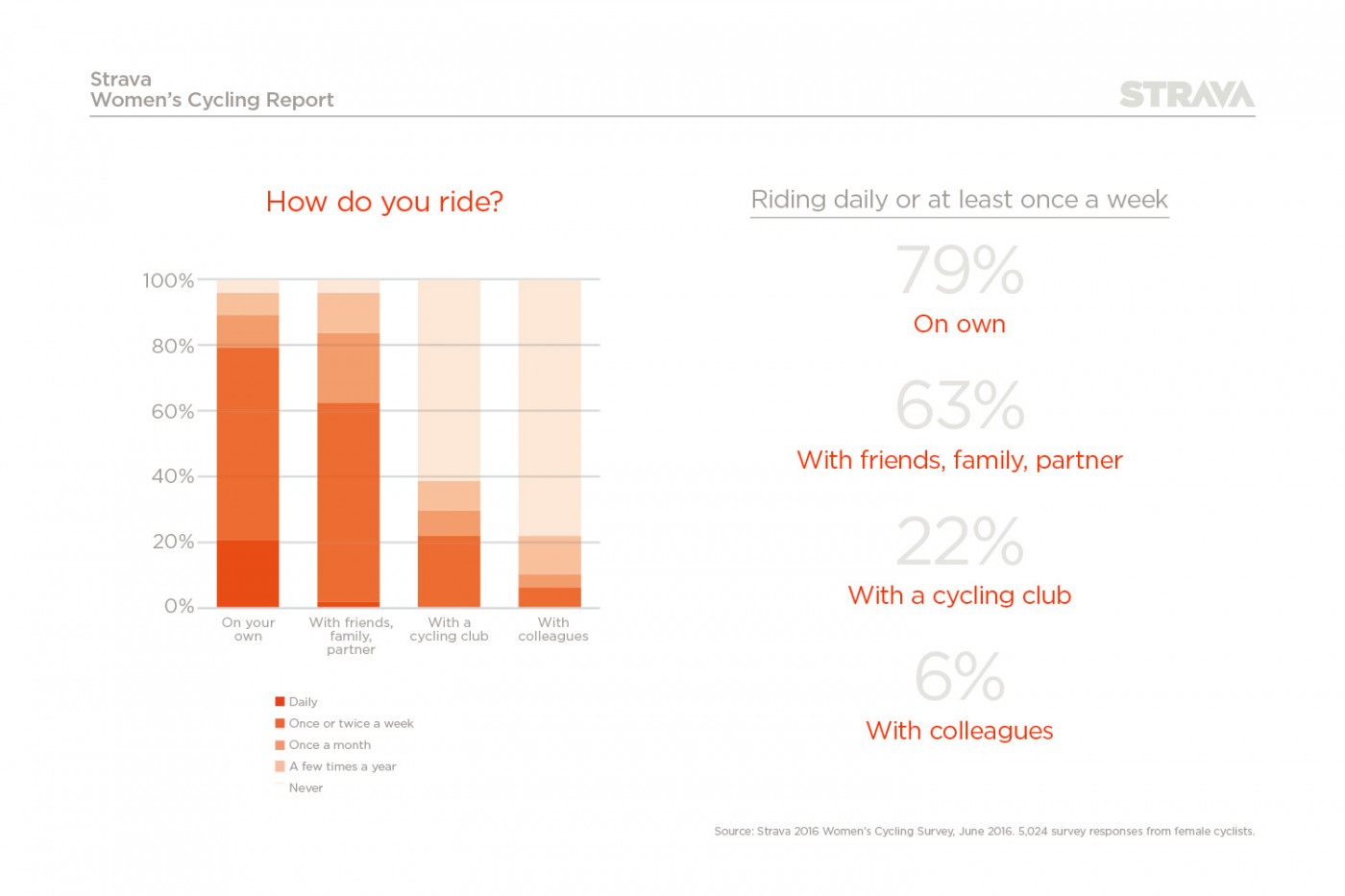 Who UK women cyclists ride with

Barriers to entry
Respondents expressed a view on the presence of barriers for women’s cycling, and the majority feel that cycling is an accessible sport. 60% disagreed that there were barriers in place for women wanting to get into cycling. 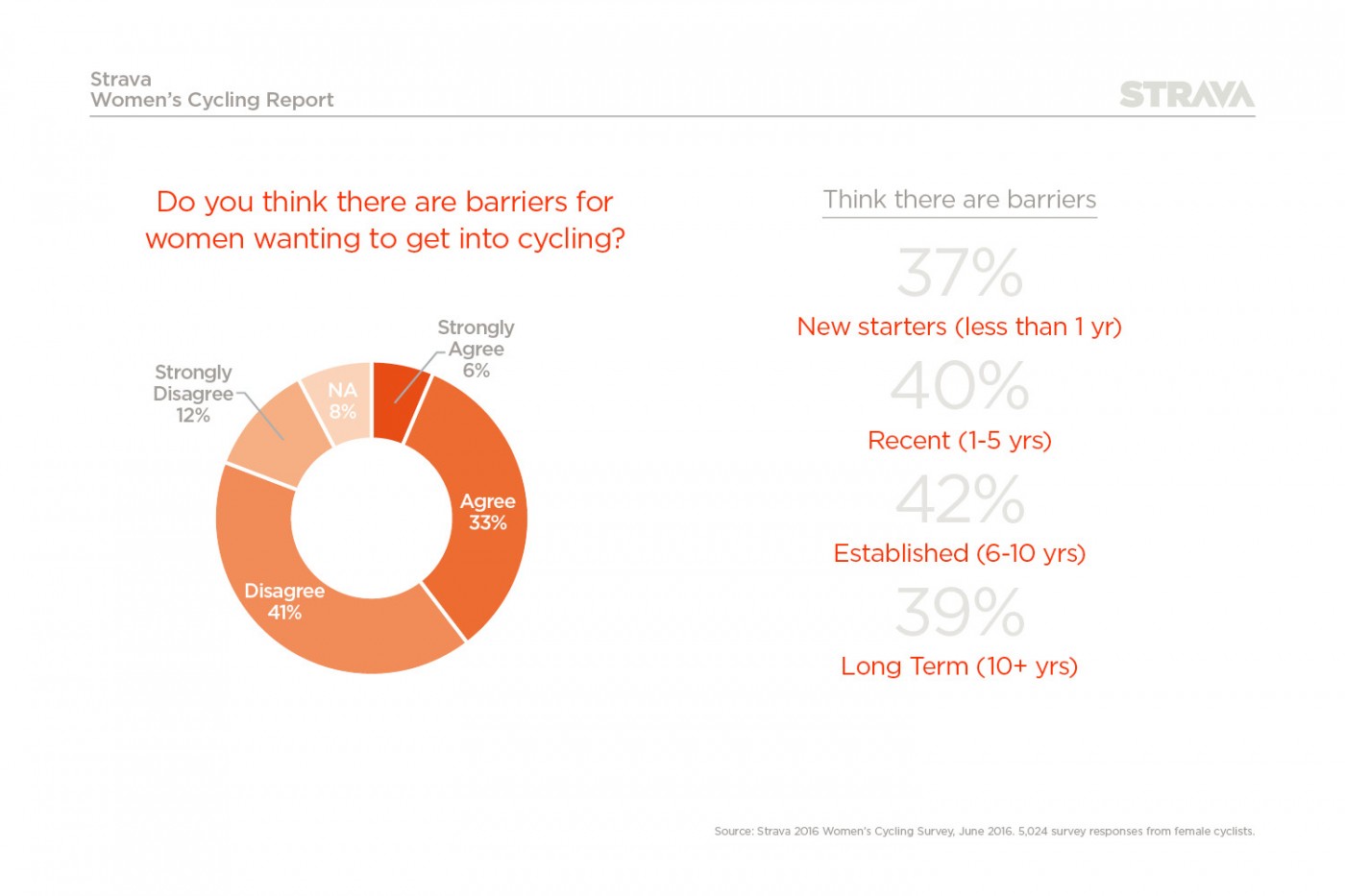 Of the 40% who considered there to be barriers, 78% blamed a perceived danger in cycling, 71% cited a lack of mechanical proficiency and 59% flagging barriers around the subject of body image. Again, these all offer brands opportunities to engage and build value with the UK female cycling community. 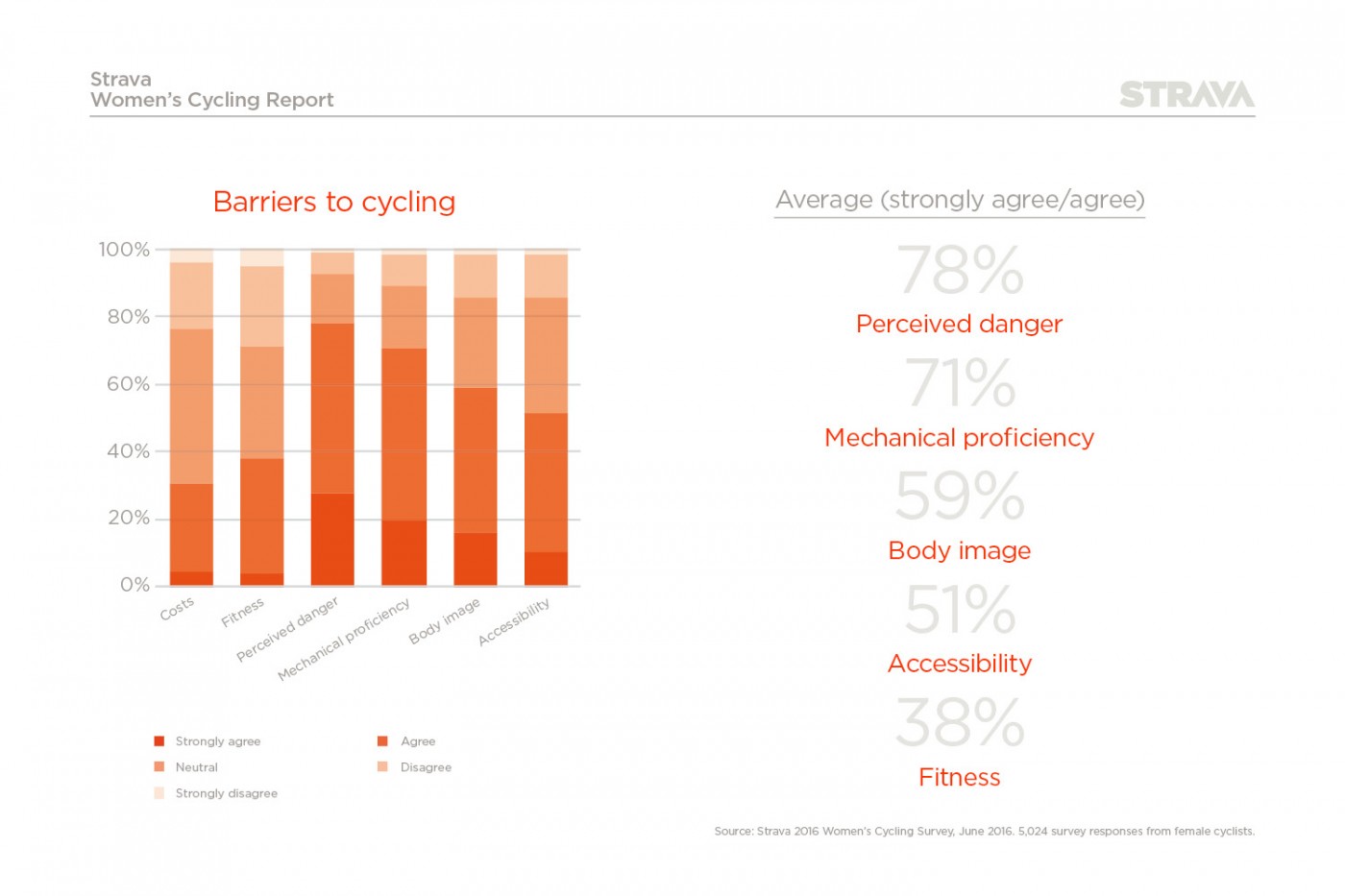 Perceived barriers to women cycling in the UK

The women’s UK cycling research respondents were asked to rank a number of influences from 1 through to 7, with 1 being the biggest influence. Aesthetics and price carried the biggest influence in women’s buying habits, scoring 1 to 3 for around two-thirds of female cyclists. 31% state that they buy their gear from specialist online retailers and 23% buy from an independent bike shop.

On average, female cyclists spent £1,050 in 2015 on cycling – including apparel, equipment, events and other related expenditure. The majority of female cyclists own 2 bikes, with an overall average of 2.1 bikes per person for all survey respondents. 16.2% ride a Specialized bike most often, 12.1% ride a Giant and 11.7% ride a Trek. On average, they purchase a new bike every 4.1 years. 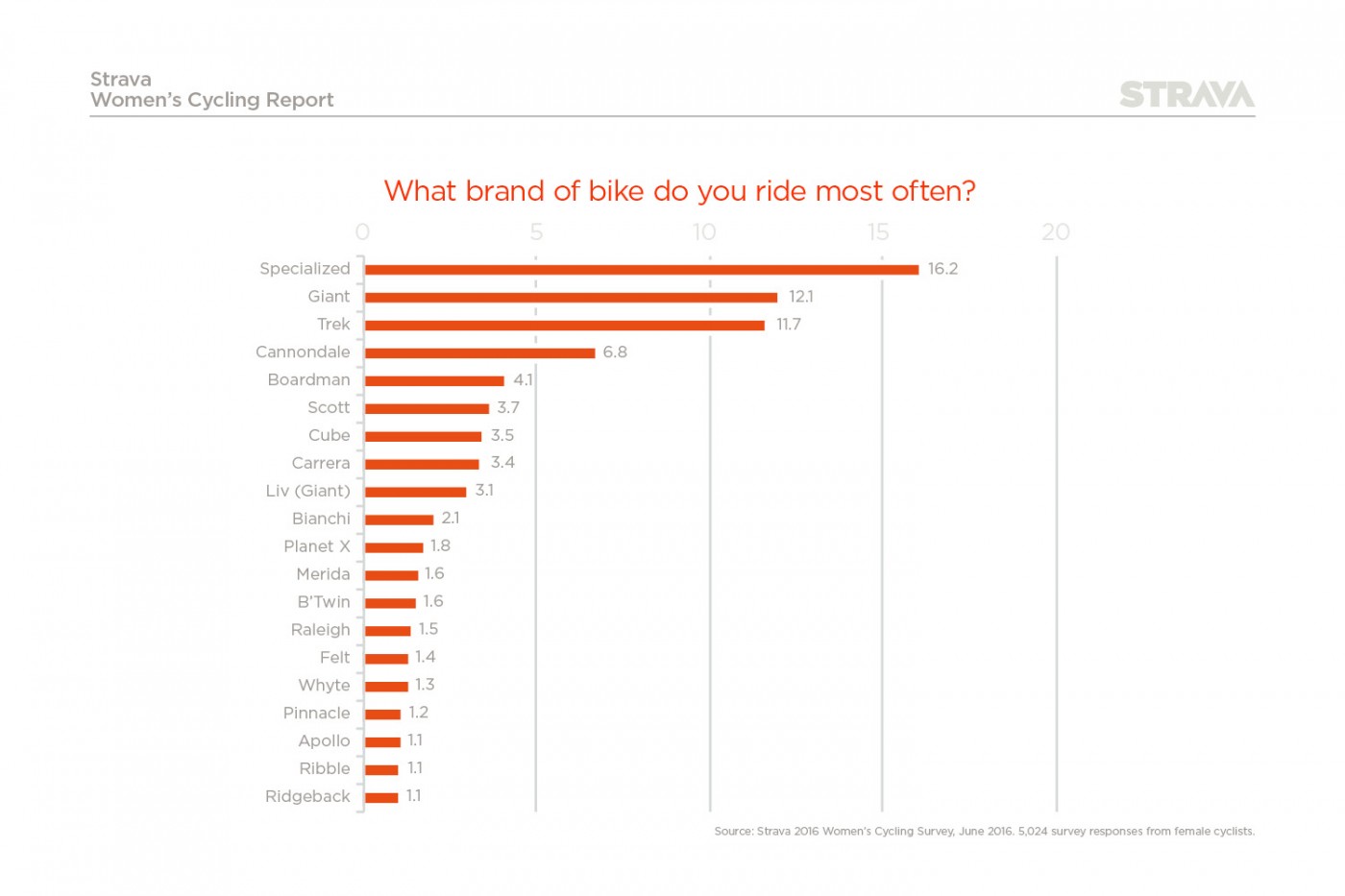 Most popular brands of bike owned by women in the UK 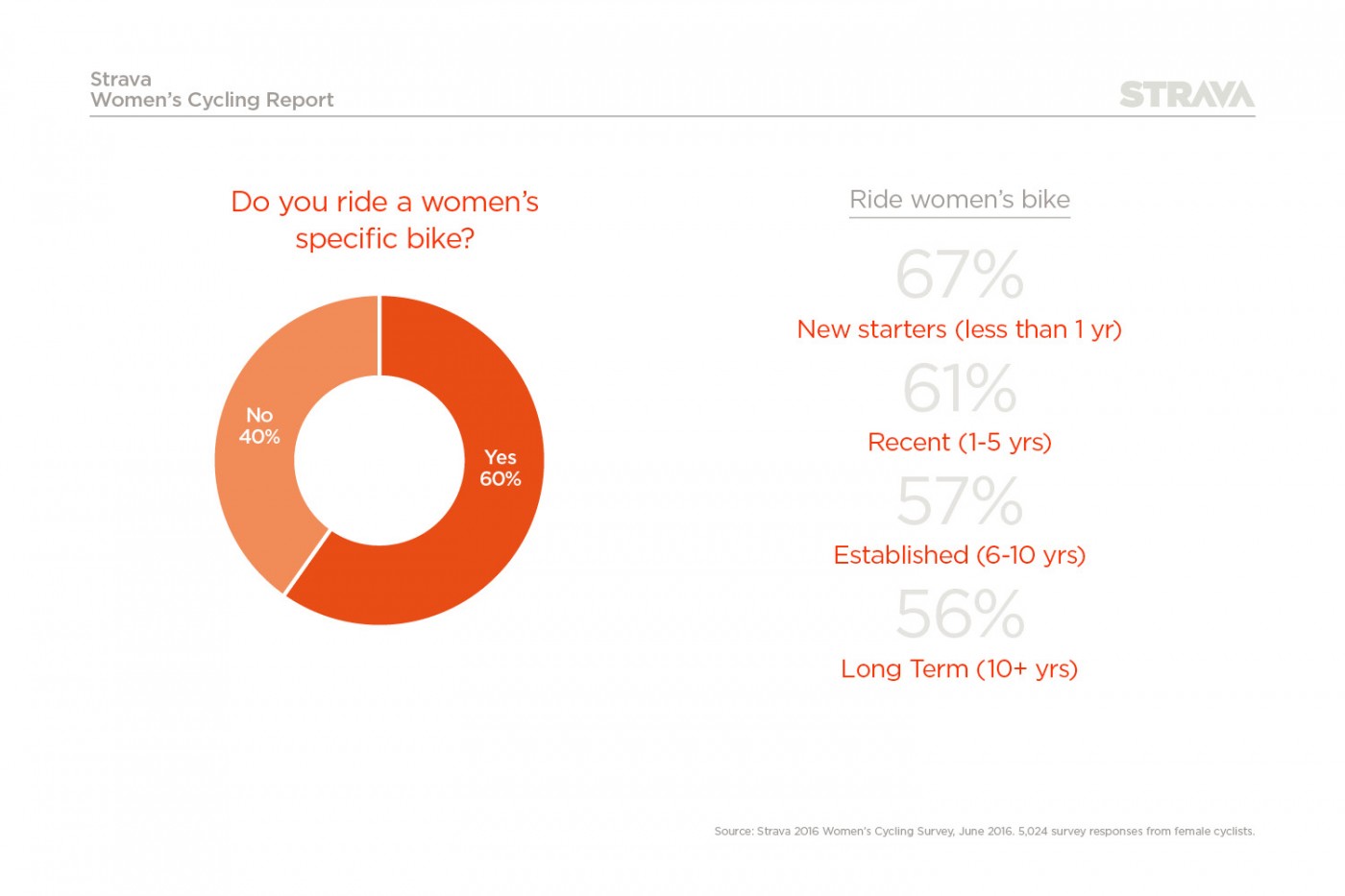 Type of bike ridden by women in the UK 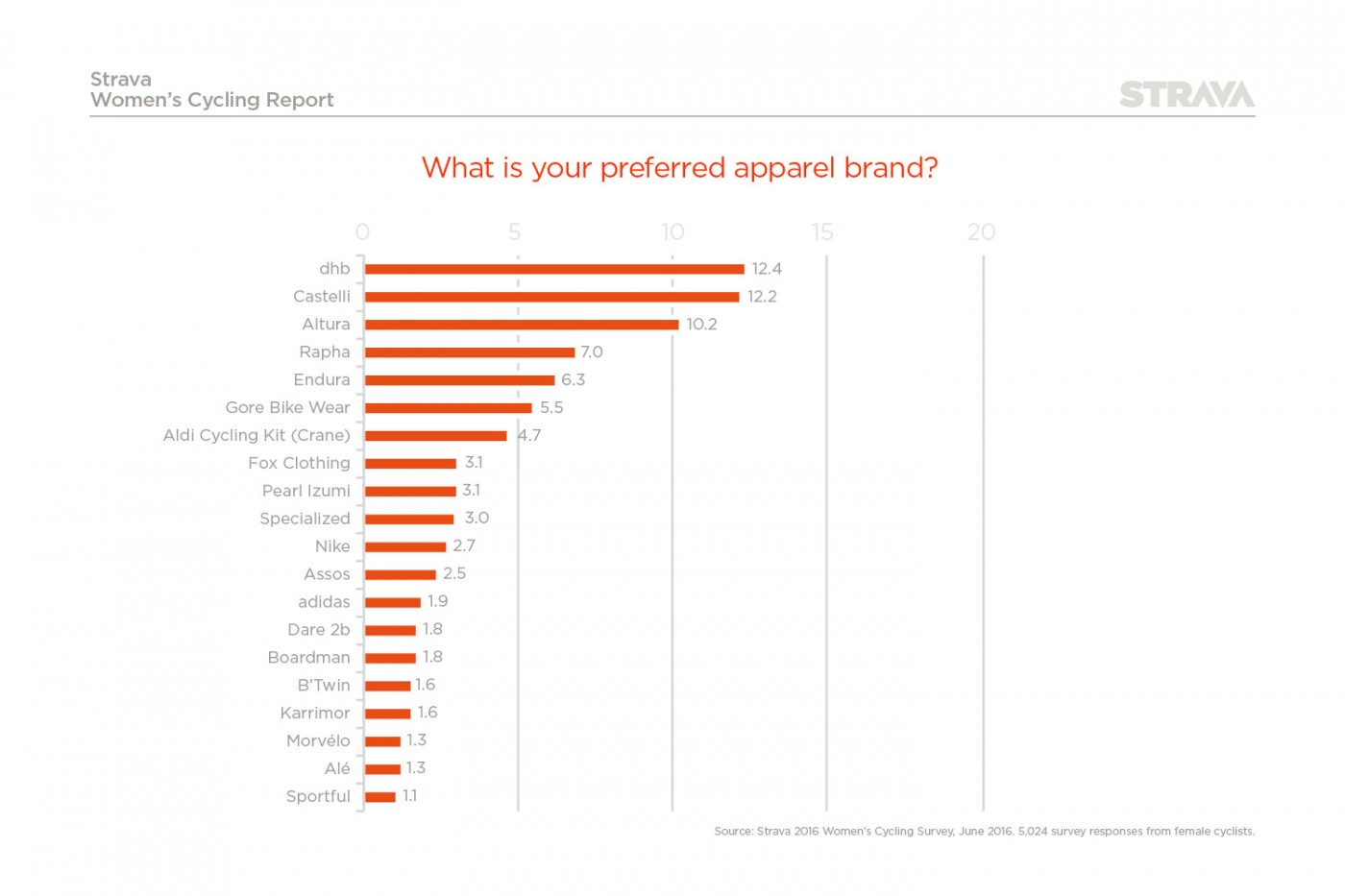 The Strava women’s UK cycling research report is one of the few female cycling reports we have seen.